Finished prepolymer comprised of macroglycols (left) and a diisocyanate (right). Courtesy of Chemical & Engineering News
Abundance
Though far less prevalent than fibers like polyester and nylon, in 2010 alone it was estimated that 80% of garments bought by Americans contained spandex [1]. That works out to approximately 16.4 billion pieces of clothing. At $4/lb, over 400,000 tons of spandex was produced globally in 2011, and the number is only increasing [1]. Materials once traditionally 100% cotton, like jeans, are increasingly made with spandex to give them comfortable mobility and desirable form fitting looks. While the percentage of spandex in clothes like jeans seems small (ranging from 1% in my bootcut jeans to 2% in my skinny jeans), with over 1 billion yards annually consumed by Americans alone, that's a staggering amount of spandex just from one product, never mind the athletic wear with spandex content anywhere in the double digit percentages [2].

History
Spandex fibers (also called "elastane fibres" by their creators) were invented in Germany in 1937 as an alternative to rubber [3]. Yet it was not until after WWII, in the early 1950s, that scientists at DuPont patented spandex spandex synthesis, and not until 1962 that scientists from DuPont began full scale commercial manufacturing. Despite its immediate popularity among scientists, it was not until 1959 that spandex made its major debut in clothing [1]. First used in bras, jockstraps, and workout gear, it quickly rose to popularity for its unique ability to stretch far more than any other fabric, and then snap right back into place.

Materials
Spandex is a petroleum based, synthetic fiber, made primarily of prepolymers (a reactive intermediate between monomers of isocyanates and polyurethane polymers) and stabilizers [4] [3]. Prepolymers used to make spandex are comprised of flexible macroglycol and rigid diisocyanate. The macroglycols are long and flexible, responsible for the fabric's trademark stretchiness. The diisocyanate is a shorter and much more rigid polymer, lending strength to the fabric. Typically, the ratio of glycol to diisocyanate is close to 1:2. The stabilizer (diamine) is added to the glycol-diisocyanate polymer in a 1:1 ratio. 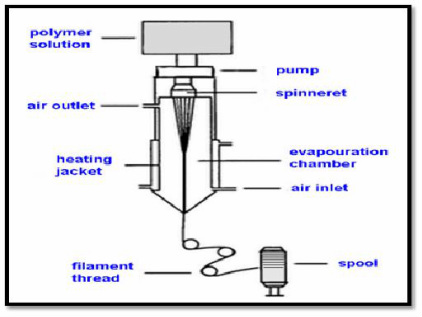 1) To form the prepolymer, mix a macroglycol with a diisocyanate monomer until they bond. Typically, the ratio of glycol to diisocyanate is close to 1:2.
2) Once the prepolymer has been made, it is reacted with an equal amount of diamine, extending the prepolymer in a reaction known as the "chain extension reaction."
3) The resulting solution is diluted with a solvent, making the solution thinner and more easily handled.
4) The solution is now forced through a spinneret (a metal plate with small holes) and pumped into a cylindrical, spinning cell.
5) In the spinning cell, the strands are heated in the presence of a nitrogen and solvent gas, causing the liquid solution to form solid strands of polymer.
6) The fibers then exit the cell and, with the help of a compressed air device, are twisted together into the desired thickness.
7) A finishing agent treats the fibers to prevent them from sticking together. Typical agents include magnesium stearate or polymers such as poly(dimethyl-siloxane).
8) Once treated, the fibers are wound onto spools anywhere between 300 and 500 miles per minute.
9) Spools full of thread are then packaged and shipped to textile manufacturers around the globe. These manufacturers then weave a blend of spandex and other materials such as cotton or nylon. Finally, the finished fabric is dyed.

Environmental Impact
Spandex is petroleum based, requires lots of energy to produce, and is not biodegradable. It takes a large toll on the environment, but there is hope. Genomatica, a San Diego start-up company, has successfully converted natural sugars produced by microorganisms to an industrial plastic (BDO) [5]. BDO is currently used to make fibers with stretch properties like spandex, effectively replacing the petroleum based intermediate chemicals.

What You Can Do
Realizing that it is exceedingly difficult to find clothes without spandex, urging people to avoid spandex is not the most practical solution, but it is a step in the right direction. Acknowledging that most clothes we own contain spandex, I urge people to consider air drying clothes with any spandex blend, or at least drying them on low heat due to the fact that heat breaks down spandex. Regardless of fabric content, air drying is always a green alternative to machine drying.